What is the difference between a corn and a verruca? 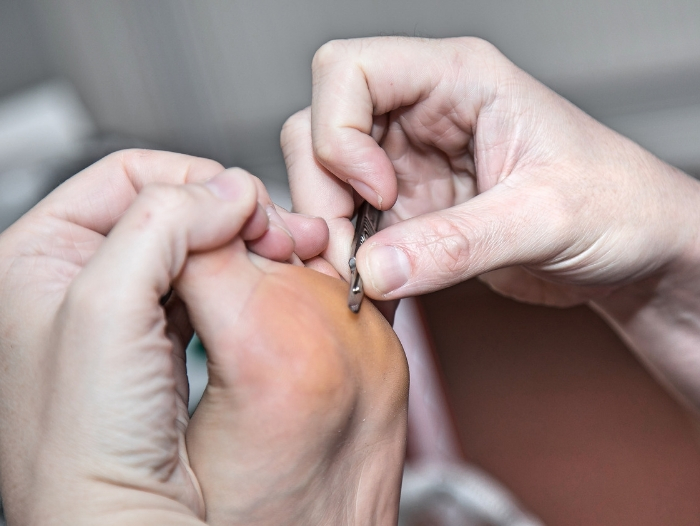 It’s worrying when you find a new lump develop on your foot and even worse when that lump becomes painful or stops you doing your normal activities. I often treat people who have used google to misdiagnose their new lesion and more often than not have used an over-the-counter treatments to incorrectly treat the lesion. Most commonly I find most people struggle to tell the difference between a corn and a verruca. So, how do you tell the difference?

What is a corn?

A corn is a cone shape of hard skin that develops due to increased pressure or friction. They are not contagious, but simply an accumulation of hard skin caused by the friction against that area of skin. They can form anywhere where you have pressure or a prominent joint, but most commonly we find them on the ball of the foot, joints of little toes and in-between toes. Thickened skin is formed to protect your foot from any pressure or friction. This thickened skin gets compacted and dries, forming hard skin (callus) and Corns. Long standing corns can become very painful as they press on nerves.

What is a verruca?

A verruca is a non-cancerous tumour like substance formed due to a virus called the human papillomavirus (HPV). They are the same as a wart you might find on your hand, but we give them the name verruca when they are on the foot. They can occur anywhere on the foot. The most common place is on the sole of the foot. Being a viral infection, they are contagious, so precautions need to be taken to prevent spreading verrucae to others for example wearing flip flops around swimming pools and avoiding being barefoot at home. They affect anyone of any age, but you need a break in the skin to allow the virus in. Walking on non-slip tiles is an example of how minor abrasions happen to the surface of the skin which allows the virus its entry point.

Corns usually appear in a spherical bump, which is raised, usually with a layer of dry skin over the top giving a yellow appearance. They cause localised pain, particularly when pressed. Corns can affect anyone of any age and ability. If left, corns can become red and swollen and potentially lead to breakdown and infection, as the skin under the corn can deteriorate under the pressure of the corn.

A verruca can seem remarkably similar in appearance to a corn. It develops into a hard callus lump much the same as a corn but there are a few subtle differences. Sometimes (not always depending on the depth of the verruca) you can see black dots in the hard skin. This is bleeding from the capillaries as the virus forms the hard lump. They appear to have a more punched out uneven surface than a corn. You can get singular verruca which can appear flat, some singular verruca can appear in a raised hard lump and sometimes there can be several clustered together which can make them look a bit like a cauliﬂower. There are many sub-types of verruca which is why they can appear in different presentations. You can have multiple types on your feet at the same time.

What is the difference between a corn and verruca?

So how is the best way to tell the difference (aside from seeing a podiatrist for a diagnosis). If you take a closer look, a corn tends to have a conical, circular shadow underneath the hard skin, you don’t tend to see this in a verruca. The verruca may have a less even colour tone, whereas a corn tends to be more uniformed in colour. The next thing to test is the squeeze test. In most cases direct pressure on a corn will cause pain, but generally speaking, it wont in a verruca. If you pinch the lesion, a corn will not elicit much pain, whereas a verruca is more uncomfortable in this position. Finally, if you take a closer look, maybe under a magnify glass, you may be able to see the lines in your skin, the line pattern and texture like you can see in your fingerprint. We call these skin striations. In a corn these are normal and not disturbed. In a verruca these are disturbed by the virus.

How to treat a corn?

Avoid corn plasters! These have acid in them to breakdown this hard skin layer, however they can cause more destruction than to the corn area and as such can cause ulcerations. You can read more about corn plasters here. Instead, try devices to offload the pressures from the area. It would also be beneficial to see a HCPC Podiatrist to remove the corn and look at why the pressure is there. Addressing these issues usually prevents the corn from returning. A podiatrist will use a scalpel to remove the corn in a process called enucleation. This is painless as there is no nerve supply in the corn.

We know that all verrucae can spontaneously resolve at any time, and as such, if they aren’t bothering you, it may be advisable to leave them to go on their own. However, if you would like to treat them there are some topical treatments you can try including:

Check out our next blog which dispels the myths on verruca treatments.

If you have a corn or a verruca, or you still aren’t sure which you have, contact your local HCPC Podiatrist today for help on diagnosis and management of your lesion.

very clear and concise description of the difference between them

Thanks John, glad you found it helpful.